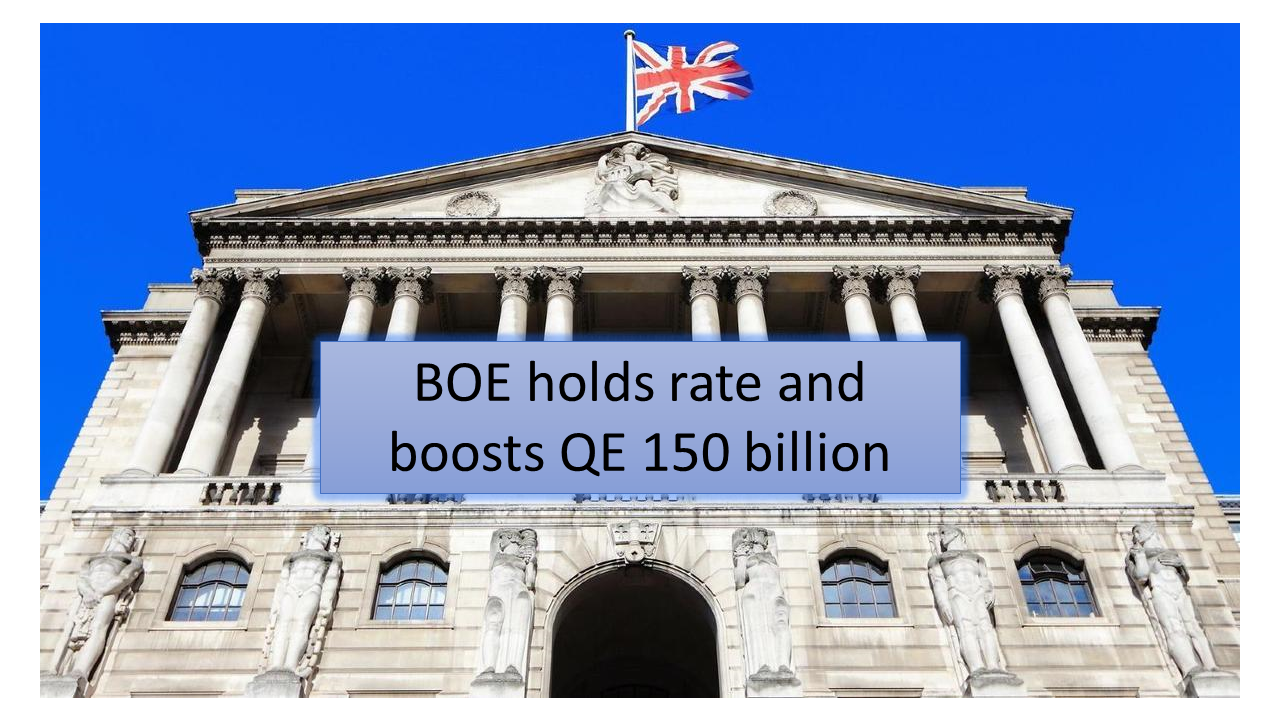 The Bank of England (BOE) left its benchmark interest rate steady but boosted its asset purchases as the United Kingdom enters a second lockdown to control the spread of the COVID-19 pandemic that is likely to hit consumer spending and lead to an 11 percent economic contraction in the fourth quarter.

The monetary policy committee (MPC) for the central bank for the United Kingdom unanimously left its Bank Rate steady at 0.1 percent for the third time since since cutting it twice in March at the height of the COVID-19 crises by a total of 65 basis points.

But the MPC increased its target for purchases of UK government bonds by another 150 billion pounds, its third increase this year after boosting it in June and March.

The BOE initially launched its asset purchase program, known as quantitative easing, in the depth of the Global Financial Crises in March 2009, and the target for total stock of bond purchases has now ballooned to 875 billion pounds from 200 billion in November 2009.

“The Committee will keep the asset purchase programme under review,” the BOE said, adding “if the outlook for inflation weakens, the Committee stands ready to take whatever additional action is necessary to achieve its remit” – tweaking to its guidance from September when it said it was “ready to adjust monetary policy according to its remit.”

The BOE reiterated that it “does not intend to tighten monetary policy at least until there is clear evidence that significant progress is being made in eliminating spare capacity and achieving the 2% inflation target sustainably.”

While the BOE boosted its purchases of UK government bonds, it maintained its target for purchasing non-financial investment-grade corporate bonds, that is financed by issuing central bank reserves, at 20 billion pounds.

“The outlook for the economy remains unusually uncertain,” the policy makers said, noting the rapid rise in COVID-19 cases that has led to new lockdown measures and an extension of the government’s furlough program until March 2021.

On top of the pandemic, the UK economy is also struggling to adapt to life outside the European Union (EU) and BOE expects trade and economic activity to be affected as businesses adapts to new arrangements, especially in the first half of next year.

The new measures to control COVID-19 are expected to weigh on consumer spending, which is already softening, and BOE now expects gross domestic product to shrink by 11 percent in the fourth quarter of this year, much deeper than it’s August forecast of an 5.4 percent contraction.

As restrictions related to the virus are expected to loosen, household spending should pick up in the first quarter of 2021, with GDP expanding 11 percent by the fourth quarter of 2021 as compared with its earlier forecast of a 6.2 percent rise.

For 2020 BOE sees the UK economy shrinking 11 percent, up from the August forecast of a 9.5 percent decline as business investment, exports, housing investment and household consumption plunge.

Inflation is expected to remain subdued this year, with consumer prices only rising 0.5 percent on average but then in 2021 and 2022 inflation is seen hitting the BOE’s 2.0 percent target.